Is the kingdom of heaven still “at hand”?

What does “at hand” mean?

Unless we exercise strenuous self-control over the workings of our mind, the barrage of unsettling news exploding all around us like endless waves of mortar will so absorb out thoughts that we lose sight of the most spectacular item of good news imaginable — the ultimate victory of the kingdom of God, when, “The kingdoms of this world… become the kingdoms of our Lord and of His Christ, and He shall reign forever and ever!” (Rev. 11:15).

At times such as this, when even level-headed people are becoming alarmed and painting dire scenarios of civil war in the USA and the overthrow of Western civilization by a scheming cadre of evil men, believers need to go back to the basics of their profession — faith in God and the vision of His coming kingdom. To die in the flesh is of small moment for in the blink of an eye we will live again and revel in pleasures at God’s right hand forevermore.

You can’t get more basic than this foundational truth:

Believers will care very much about loved ones and the fate of all good people. But set against the dazzling glories and unending joy to be found in the kingdom of God, the pain and suffering of our sojourn on earth is but a “… light affliction, which is but for a moment” (2Cor. 4:17). This saying is true for all human beings, whether they believe or not. The fabulous, fantastic, mind-numbing good news is that the utopian, glorious kingdom of heaven is “at hand”.

But what does that mean? And is it still “at hand” or did it cease to be so at some time since Jesus spoke those words?

Endless tracts, pamphlets, theses, and books have grappled with the meaning of these words. What in all the world could hold more significance for a believer than the “at handness” of the kingdom of God, the solution to all the world’s evils? The chief bone of contention centres on the meaning of the Greek verb, eggizo, used in this passage and translated “at hand” in virtually all versions. Let’s not loiter on this point. The meaning is quite clear: it means to “come near, be near”. It does not mean “to come”. The kingdom of heaven has drawn close. It has not yet come in its fullness. Jesus instructed us to pray, “Your kingdom come” (Matt. 6:10), necessarily implying it hasn’t yet done so. Here the Greek verb translated “come” is erchomai, a word that comes about as close to the English verb “come, arrive” as you can get.

Beginning with John the Baptist, for the first time in history, the kingdom of God had come close to us (Matt. 3:2). How can we be sure that it had not been near before? Note Jesus’ words in Mark 1:15:

The time is fulfilled, and the kingdom of God is at hand.

In other words, before this time, the kingdom of God was not at hand. Its nearness is a new phenomenon. But the question of meaning does not end there. Did it come near in the sense of time or of space? Had the kingdom of heaven at last become imminent, just months or a handful of years away? Or had it come close enough to “touch”, so to speak? We cannot answer that question based on the Greek word; it’s just as ambiguous as is the English term “come near”. Could be either.

Pause and ponder. How could an event be imminent today but not yesterday, or the day before, or the year before? Imminence cannot begin on a day on the calendar. The date for Jesus’ return has been forever set in stone. At no point in time can it suddenly be said to have become imminent.

Conversely, something can most certainly come near “geographically” at a given moment. Herein lies the answer, an answer Scripture shows to have two sides to it. First, the very presence of Jesus Christ, who is the focal point, the sine qua non, very King of the kingdom of heaven, signified the proximity of the kingdom itself (Matt. 12:28). When He departed, it did too. Second, from that time on, the kingdom was now accessible to human beings. It had come within reach of the masses. For the first time, God smashed the heavy bars holding the gate firmly locked and flung it open, providing an entrance into His kingdom. That door will remain open till the end of judgment day.

Truly, these times of ignorance God overlooked, but now commands all men everywhere to repent (Acts 17:30).

To enter through the door, an unbeliever must repent and believe when he hears the voice of a preacher sent by God (Rom. 10:14). When we do that, we become displaced citizens of the kingdom of God (Col. 1:13)  spending the rest of our lives as sojourners and strangers on earth. Now a believer, we must maintain a grip on the kingdom of God stronger than that of a Scotsman on a £10 note.

Hold fast by eating, sleeping and breathing the kingdom of heaven. Constantly entertain the vision of what it will be like to be forever in the presence of Jesus Christ, our elder brother, Saviour and King. No man has the power to slam the door shut in your face. Don’t close it yourself. 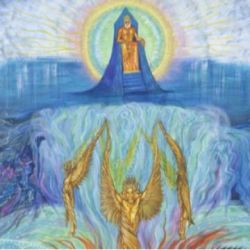 For more, see the blog "The Kingdom of heaven is at hand" on our legacy site.