The kingdom of Israel?

In His famous Olivet prophecy, Jesus made it as clear as it could be that His return and the establishment of the kingdom of God would not occur until other major events, such as the destruction of the temple, the great tribulation, and the preaching of the gospel in all the world, had first taken place. Only when these things either were in full swing or had actually happened could Jesus’ followers know that the kingdom of God was near (Lk. 21:31).

How passing strange, then, that only two months later, minutes before Jesus’ ascension into heaven, the disciples should ask Him this question:

Lord, will You at this time restore the kingdom to Israel (Acts 1:6)?

These were young men many years shy of forgetting whether or not they had already brushed their teeth that morning, so we can reject the notion that they had simply forgotten what Jesus had said two months before. One must conclude that “restoring the kingdom to Israel” had a different meaning from “establishing the kingdom of God”. They certainly were not asking the question, “Will you at this time return like the lightning shining from east to west and sit on your throne?” If that is what they were asking, Jesus surely would have scolded them for forgetting what He had told them only two months earlier in his telescopic outline of events leading to His return. What, then, could they have had in mind?

Christian commentators generally take the view that their question about restoration “is turned aside by the risen Lord, and the general implication is negative" (David Tiede, The Exaltation of Jesus and the Restoration of Israel in Acts 1”), whatever exactly that means. Explanations become blurry, a hint that expositors are doing some interpretive dog paddling. Some suggest that the coming of the Holy Spirit upon the disciples shortly thereafter constituted the restoration. However, Jesus’ response seems to suggest anything but a “turning aside” of their question:

It is not for you to know times or seasons which the Father has put in His own authority (vs‑7).

These words show His approval of the content of their question; the restoration of Israel would occur when the set date on the calendar comes round, sometime between then and the return of Jesus Christ and the ultimate establishment of the kingdom of God. When the time is right, political independence under a descendant of David would be restored to Israel/Judah, as promised in Jeremiah 33:25‑26:

Thus says the LORD: “If My covenant is not with day and night, and if I have not appointed the ordinances of heaven and earth, then I will cast away the descendants of Jacob and David My servant, so that I will not take any of his descendants to be rulers over the descendants of Abraham, Isaac, and Jacob. For I will cause their captives to return, and will have mercy on them."

The kingdom of Israel/Judah had come to an end over six hundred years before the Ascension and the disciples’ question when Nebuchadnezzar sacked Jerusalem, destroyed the temple, deposed Judah’s last king, Zedekiah, and took much of the remnant of the people to exile in Babylon. Seventy years later, the exiles returned to Jerusalem and the promised land and became a people once more, but never did they become an independent kingdom (though they did enjoy a brief period of independence from 163-63 B.C.). Ever since then, Jews have hoped for a restoration of the kingdom in accordance with the promises of Jeremiah and other passages that suggest Israel would become a sovereign nation again. Psalm 132:10, probably written after the return from exile, says,

For Your servant David's sake, do not turn away the face of Your Anointed.

The Jewish Soncino Commentary remarks that this verse means, “May God restore the monarchy of the house of David”.

True, were it not for the disciples’ question, one could interpret such prophecies to be foretelling Jesus’ reign over Israel upon His return. Jesus is the descendant of David, the redeemer of Jerusalem, the consolation of Israel who will rule over the nation “forever”, but none of this precludes a “this age” national fulfilment. The simple fact that they asked if the restoration of Israel would happen almost immediately when they knew that His return and His reign was way down the track somewhere shows they expected a national restoration to occur at some time in this present evil age. Neither the Olivet Prophecy nor the book of Revelation gives any hint as to when, or even if, that may occur.

Though it doesn’t prove anything, we note with interest that long after Jesus had ascended, the Romans launched a search for any surviving descendants of David so that all claimants to membership of the royal house of David should be rooted out lest Jewish zealots seek to set one of them up as king of Israel. In the reign of cruel Domitian (81‑96 A.D.), the rigorous search yielded only two “suspects”. The Emperor interrogated them himself. Their mean clothes and poverty, their labour-calloused hands and their sworn lack of any interest in political issues saved them from a certain, and probably painful, premature death. Were they spared by divine purpose?

Nearly two thousand years have elapsed since Jesus told the disciples the restoration would occur in God’s good time. But 72 years ago, the nation state of Israel was born. Even most Christians who believe the nation of Israel has no major role to play in the supposed age of the Church suspect this rebirth was not merely an artifact of history. Would we be losing the plot if we wondered out loud if maybe, just maybe, some existential crisis might spur the house of Judah to turn wholeheartedly and single-mindedly to the Holy One of Israel in contrition? How might God respond? What role would a restored Judah play in the age of the Church? Just wondering. 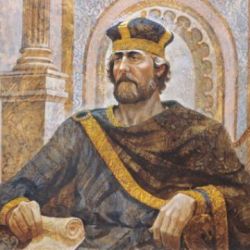