Reflections at the 1950th anniversary of the temple’s destruction

Today is a day of mourning and fasting for Jews around the world, for on this day, the ninth day of the month of Av, known as Tisha B’Av in Hebrew, both Solomon’s Temple (First Temple) and the Second Temple were razed by fire, Solomon’s by the Babylonians in 585 B.C.  and the Second by the Romans in 70 A.D. Those versed in arithmetic might quickly note that, being 2020 as it is, today is the 1950th anniversary of the Second Temple’s destruction.

Christians should mourn this event, too, as Jesus gives the temple His full endorsement, acknowledging it as a place where God dwelt (Matt. 23:21) and its intended role as “… a house of prayer for all nations” (Mark 11:17). Frankly, Christians need to completely overhaul their attitude towards the temple. True, many Christians fervently long for the temple to be rebuilt, but their zeal stems not so much from a desire to participate in its spiritual benefits as from its role in their scenarios of end time events. Scripture strongly indicates the presence of a standing temple in the last days — no temple, no likelihood of Jesus’ imminent return. But many of these same people would hasten to disavow the ascription of any spiritual value to a stone edifice. Some believers get quite indignant over the very idea:

The picture of the millennial kingdom with Christ reigning visibly from a throne in Jerusalem, while animal sacrifices are being offered again in a rebuilt temple nearby, is an astonishing and incredible idea. It appears deeply dishonouring to the Lord… (Bruce Milne, The End of the World, p. 91).

This attitude ignores the testimony of Scripture, which has much of a positive nature to say about the temple, such as,

“Go up to the mountains and bring wood and build the temple, that I may take pleasure in it and be glorified," says the LORD (Hag. 1:8).

Consider also the affection expressed by God for this edifice in Psalm 132:13-14:

For the LORD has chosen Zion; He has desired it for His dwelling place: This is My resting place forever; here I will dwell, for I have desired it (vss. 13-14).

A study of Old Testament usage of  עֲדֵי־עַ֑ד(forever) and its synonyms shows that it does not imply unbroken duration in the way English “forever” implies. God has chosen the temple in Jerusalem as His dwelling place, and there He will dwell again. None of the standard theological objections to the abiding value of the temple — it was something imposed until the time of reformation, it has been replaced by a spiritual temple, Jesus Christ is the reality — stands up under close scrutiny. Indeed, a promise that should cause believers to quiver with joy and anticipation involves the temple:

For thus says the LORD: “To the eunuchs who keep My Sabbaths, and choose what pleases Me, and hold fast My covenant, even to them I will give in My house and within My walls a place and a name better than that of sons and daughters…” (Is. 56:4-5).

Authority and "status" (place and name) in a new temple number among those aspects of the “grace to be brought to you at the revelation of Jesus Christ” (1 Pet. 1:13). Jesus' promise in John 14:1-3 stunningly corroborates Isaiah's words.

For hundreds of years during the eras of both First and Second Temples, the descendants of Abraham experienced tremendous blessings in the shadow of the temple. But their incorrigible stubbornness eventually disqualified them from continuance in its gracious benefits. Not only did their sins mount to heaven, they also began to put their faith in the temple rather than in God. And so, they were judged unworthy of the divine presence:

Thus says the Lord GOD: “Behold, I will profane My sanctuary, your arrogant boast, the desire of your eyes, the delight of your soul; and your sons and daughters whom you left behind shall fall by the sword” (Ezek. 24:21).

The war that took place almost forty years after Jesus ascended to heaven was so monumental in its degree of devastation that, as Jesus foretold, not one stone was left standing on another. Few people have any idea of the degree of savagery displayed by both defending Jews and assaulting Romans during four years of conflict in Jerusalem. After three years of ongoing stalemate, in the spring of 70 A.D. the Romans encircled the city with a wall to cut off supplies completely and thereby drive the Jews to starvation. By August they had breached the final defences, massacred much of the remaining population, and then, on the ninth of Av, burned down the temple. The exact number of Jews who died cannot be known. The contemporary historian, Josephus, claimed 1.1 million people perished, but that figure is hotly disputed.

When Jesus returns, He will build a new temple and rule all the earth from there:

Son of man, this is the place of My throne and the place of the soles of My feet, where I will dwell in the midst of the children of Israel forever (Ezek. 43:7).

And you can walk the paving stones of that temple with Him! Jesus can be your best friend. The temple can be your new dream home. 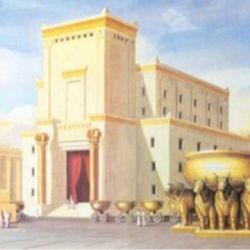 Click here to read a chapter on the destruction of the temple taken from the Dawn to Dusk book, "Shadow and Reality"