Nanopillars: pillar shaped nanostructures grouped together in lattice like arrays

Optimistic hearts everywhere are all aflutter with hope that scientists will be able to fabricate coating materials that mimic microscopic structures found on dragonfly and cicada wings which scrunch bacteria that alight on them in addition to bestowing anti-wetting properties. They hope that these materials, sometimes called “nano-coatings”, can be applied to the surfaces of objects often touched by people, such as door handles, tables and lift buttons to serve as a non-chemical antiseptic.

In 2013, Biophysics Journal ran an article explaining that the nanopattern on the surface of Clanger cicada (Psaltoda claripennis) wings can kill bacteria on contact based solely on their physical surface structure. The study was sparked by the observation of two of its authors while hiking that the wings of dead cicadas did not decompose to the same extent as other parts of the body. Later studies found that dragonfly wings can do the same.

Microscopic studies show that the wing surface is covered with up to ten billion or more tiny fingers, dubbed “nanopillars”, arranged in hexagonal arrays. Nanopillars are conical in shape, thicker at the wing surface and tapering towards the tip, and soar to a height of about 200 nanometres on cicadas (two ten thousandths of a millimetre) and higher on dragonflies. Some species sport nanopillars of two discrete sizes. Cicada nanopillars are spaced about 170 nanometres apart.

The wing surface killed, according to the authors of the paper, by mechanically rupturing the bacteria. A typical bacterium would straddle at least several nanopillars, meaning that it is lying on a widely spaced deathbed of nails. Not all bacteria species fall victim, those with less rigid membranes being more susceptible than those with rigid membranes. Death is said to occur within about twenty minutes of settling.

Since then, others have studied the phenomenon and, naturally enough, disagreement has arisen as to the precise details of how the foul deed is done at the nanoscale level — whether by dagger to the heart, blunt instrument to the head, strangulation or bleeding through dozens of pricks. The general picture seems fairly clear. Adsorption is the physical process by which molecules of a gas or liquid are “magnetically” attracted to and adhere to a solid surface. The membrane of a bacterium is so thin it acts almost like a thick liquid. Upon landing on a nanopillar array, the membrane is adsorbed, sinking down onto and spreading over the nanopillars which exert a grip on bacteria similar to Velcro and is severely stretched in the process. This video illustrates the process.

This video suggests death occurs when the bacterial membrane is punctured by the nanopillars allowing its contents to ooze out. More recently, some researchers have proposed that the stretching of the bacterial membrane causes oxidative stress. Other scientists are of the opinion that the bacteria are not sucked down and over the pillars at all but that they sit on top of the nanostructure and exude a substance that glues them onto the pillars. Death is purported to result from the bacteria tearing themselves apart trying to escape.

Pause and ponder. How could such amazing structures have evolved? Common sense alone is enough to make one quickly dismiss the naïve notion that structures of sophisticated microengineering could have arisen over millions of years through a series of happy genetic accidents in which an original “rough and ready” innovation is gradually perfected until you have a functioning nanokiller. It either works from the get-go or it doesn’t. That structures like this could have arisen in one mutational fell swoop in just the right location on the upper wing surface is impossible.

Then you have the massive problem of explaining how these structures have evolved on species within two distinct orders of insects — Odonata (dragonflies) and Hemiptera (cicadas). If the notion that they could have evolved on one kind of insect stretches the mind beyond breaking point, how much more ludicrous is the idea that the same microstructures could have evolved twice! Believe it or not, this phenomenon of similar traits — sometimes nearly identical traits, as in our current example — supposedly evolving independently in creatures that, according to theories of evolutionary relationships, are far removed from each other, appears jillions of times in nature. Evolutionists call the phenomenon “convergent evolution” or “parallel evolution”.

Notice the "space" that separates the two insect orders in which this phenomenon occurs. They are too far apart for the possibility that the one inherited it from the other. To suggest that this phenomenon is a conserved trait inherited from a common ancestor makes no sense, as then one would expect the same structures to be found in other insect orders descended from the same ancestor.

As they say, if it waddles like a duck, quacks like a duck… you know the rest. If it has all the earmarks of design… to God be the glory. 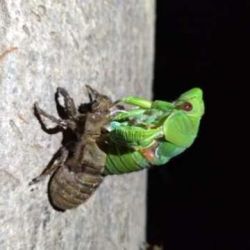