The scum speck with a stretchy neck

Just when you think you have heard of every possible marvel of creation, something totally novel and unexpected and wondrous beyond measure pops into your life. Such was the case a few days ago when a video from my favourite YouTube channel, Journey to the Microcosmos, appeared. It featured a microscopic organism about 0.1 mm long at rest capable of unspeakable contortions. When hunting, its remarkable neck can be stretched out, giraffe-like, up to eight times the length of its body in a matter of seconds, twist and bend any which way, and then retract rapidly. When dormant, the neck disappears almost entirely into the body, leaving the head protruding from the teardrop-shaped body like the proverbial pimple on a pumpkin.

These jerky, or whip like, sweeping movements have a purpose; they enable the tiny predator to randomly sample a broad area in search of food. When contact is made with suitable prey such as smaller protozoa, the head spits out some lethal threads that disable the prey, following which it is instantly engulfed by the head. Over the course of about 15 seconds, down the hatch goes the morsel, distending the predator’s neck as it is squeezed down into the body like an orange being swallowed by an ostrich.

The animal, Lacrymaria olor, is a species in the phylum Protozoa, microscopic creatures consisting of only one cell. Some zoologists prefer to call them acellular, meaning “not made of cells”. Libbie Hyman says, “The Protozoa are not loose cells moving about but complete organisms that may be of more complicated construction than the simplest Metazoa (multi-celled forms)”. Did you catch that? In some cases, these creatures, usually invisible to the naked eye, exhibit breath-taking micro-engineering more complicated than creatures composed of many cells.

We may be tempted to think that a creature so small doesn’t have to conform to the laws of physics and chemistry in the same way dogs and elephants do, or that the very idea of design breaks down at that scale. Nothing could be further from the truth. God devoted as much attention to the ultrastructure of these motes of life as He did to the anatomy of human beings. Let’s watch the video.

What mechanics are involved in extending and retracting the neck? It goes something like this. The total length of the body of the cell and the neck can be changed on a timescale of minutes, while the neck can be extended and retracted in seconds. The hunting behaviour observed is created by a coupling of the two. The slow change involves contraction or expansion of a helical “skeleton”. The rapid neck expansion and contraction is governed by cilia, tiny whips that are found densely packed on the head and more sparsely on the neck and body. The coordinated beating of the cilia creates controlled currents in the surrounding water which in turn generates movement.

So how does it work? When about to hunt, the body anchors itself to some object. Only then can it stretch its neck; it cannot do so while unattached. This fact provides a clue to the mechanics. It shows that the extension does not occur by sudden application of internal pneumatic pressure, for if that were the mechanism it should work equally well when not anchored. Observation shows that when the neck telescopes, the head and neck cilia whir like crazy. When it retracts, the head cilia cease beating and the neck cilia switch to beat in the opposite direction. So, instead of the neck being pushed out by the body, it is pulled out by rapid ciliary beating that stretches the neck. Think of a propeller on an aeroplane pulling the plane along. When the propeller stops, the elastic nature of the neck, coupled with switched direction of beating of neck cilia, rapidly pulls it back. Differential beating of the head cilia produces changes in direction of motion of the neck. To summarize:

… the head of Lacrymaria behaves much like an independent organism attached to the body by means of highly elastic tissue, far more elastic than rubber of the best quality, for that can be stretched only eight to ten times its own length, while the neck of this creature can be extended approximately fifty times its length when contracted.

Many more fascinating aspects of this creature deserve coverage. Some other time, some other place. Let’s pay a nod of the head to just a couple of them, shall we.

Observations have shown that many specimens contain tiny round algae in their cytoplasm (the jelly-like matrix of which they are made, and which houses all the organelles, including the nuclei). Studies show that the algae and Lacrymaria trade nutrients.

Also of considerable interest is its manner of “multiplying by dividing” (binary fission). The cell burrows into detritus and relaxes, spinning slowly on its axis while all sorts of rearrangement and duplication of organelles takes place on the interior. When that is done, it constricts across the centre crosswise until the two halves separate. The “front” part already has a [retracted] neck and head, while the “back” portion obviously does not. At some point shortly before separation, the back portion suddenly regenerates a neck and head complete with cilia!

For all you know, this tiny miracle may be plying its wondrous trade in some decaying aquatic plants near you. Don’t you look forward to becoming thoroughly familiar with Lacrymaria up close and personal in the kingdom of God? I do. 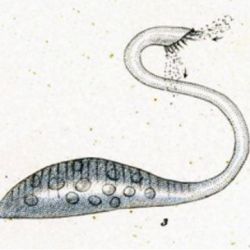