The bumblebee story has gone viral on social media. Researchers Professors Consuelo De Moraes and Mark Mescher of the Federal Institute of Technology in Zurich have uncovered an amazing bumblebee sleight of tarsus. It goes like this. When bumblebees emerge from winter sleep, they are, unsurprisingly, ravenous. They need flower nectar to fuel their tiny motors and pollen for protein. Imagine their disappointment, if not panic, should they waken in an unwelcoming, flowerless world. Not to worry, they have a trick up their proboscis, literally.

The problem faced by emerging bumblebees is far from unique, as untold thousands of species of insects must time their emergence from torpor or pupation with the ready availability of their natural food. Every case of phenological coordination between insect and plant is as remarkable as the story of the bumblebee and its floral friends. But hey! That is the one that has caught everybody’s imagination, so let’s not digress any further.

If their food plants are not flowering, bumblebees know exactly what to do — attack them. “They nibble holes in leaves, spurring plants to blossom weeks ahead of schedule.” Instead of flowering in about 33 days — the average time for unmolested plants — wounded plants flower about 17 days after being assaulted. For the bumblebee, it’s like the arrival of the Cavalry.

Experiments showed that something more than just lacerated leaves were needed to stimulate the plants to flower. Simple logic suggests the bees introduce some chemical stimulant into the wounds, probably a plant hormone.

Naturally, everybody religiously ascribes the phenomenon to the wonders of evolution. The theory is that the humble bumblebee evolved this skill because it “contributed some relative fitness benefit to the colony”.

How could such a plant-insect interaction evolve gradually over thousands of years? The whole idea is really quite absurd. One writer confesses, “Many questions remain about the details of this strategy and how it evolved.” You bet they do.

Remember, bees don’t meditate. No way under heaven did they figure out that if they could come up with just the right saliva recipe and invent an effective delivery system that, bingo, the plants would flower. No way could they determine exactly which plant hormone would do the trick; the researchers haven’t been able to nail the agent. No way could they figure out how to synthesize the required compound in the salivary glands. And even if they could work out all these things, the system would not work unless they were all acquired simultaneously. If acquired piecemeal, they would not be baked into the DNA.

No. These innovations, according to evolution theory, were acquired as a result of unplanned mutations. In a virgin queen bee. Not just any old bee would do. Further, to be passed on to future generations, these mutations must occur in her germ cells, not in any old somatic cell. How many useless, if not downright destructive, mutations must reigning queen bees have undergone over millions of years before one hit the jackpot?  And we won’t even broach the question of whether or not a nearby male bumblebee must have had the same magic mutation wand waved at it at the same time. Or whether or not it was this particular male, out of many suitors, that succeeded in seducing the freshly mutated virgin queen.

Even experts are bemused by the notion that this setup evolved. Lars Chittka, a behavioural ecologist at the Queen Mary University of London, who was not involved in the study says, “It’s certainly surprising…We’re only at the beginning of exploring this phenomenon… For all of this to somehow have come about by evolutionary trial and error process, it’s surprising.” 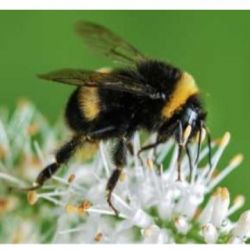